Want the warmth of a fireplace without the safety and environmental concerns that keep other Massachusetts residents up at night? Choose Ortal’s direct vent gas fireplaces. Modern. Beautiful. Safe. Clean. 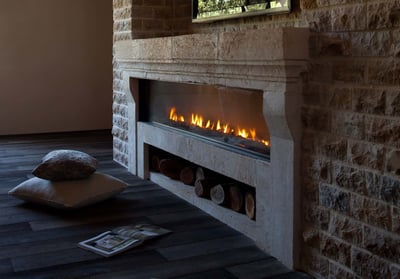 What Does Massachusetts Say About Fireplaces?

Read the Massachusetts Building Code, and you’ll notice an entire section on chimneys, fireplaces, and solid-fuel-burning appliances. The section runs for pages and pages. Each page contains a number of provisions that detail what you can and cannot do when installing a fireplace.

Why devote so much space to fireplaces?

In 2015, alone, the state witnessed 689 fire incidents involving fireplaces, chimneys, and woodstoves. Throw in the pollution problem that plagues cities where wood-burning fireplaces are common, and you have a state-wide problem.

Of course, the problem isn’t with fireplaces; it’s with poorly manufactured, poorly constructed, and poorly maintained fireplaces. Hence, the mountain of regulations.

Fortunately, there’s a way to sidestep all those concerns. Get a fully modern, fully efficient, fully gas fireplace. Here’s why:

Cut Down on Pollution with Gas Fireplaces

Officials in Massachusetts are concerned about wood-burning fireplaces. Justifiably so. Not only are they more harmful to the environment; they’re also more dangerous.

That’s because the smoke from wood is filled with pollutants: carbon monoxide and nitrogen oxides, not to mention soot and fine particles. All those chemicals can easily seep into the air and into the lungs, causing pollution and even respiratory problems.

It’s no wonder many localities within Massachusetts place restrictions on wood-burning units. Some even ban their construction altogether.

Your average masonry fireplace, which vents through a chimney, does a poor job of removing combustion byproducts. Direct vent gas fireplaces, on the other hand, do a stellar job. Since they’re sealed off from the room, there’s no risk of exhaust entering the building.

Ortal’s direct vent models are also more efficient. Instead of losing most of their air when the heat rises out of a chimney, they pull in air and then expel exhaust outside.

Ortal fireplaces eliminate the need for 36’’ of clearance. Our Cool Wall Technology keeps the surrounding walls of a fireplace cool, so you don’t have worry about fire or heat damage.

Finally, Massachusetts recommends that owners equip their fireplaces with heat-tempered glass doors to protect people and nearby objects from flames and heat. Put a heat barrier up, and you lose the benefit of warmth, right? Doesn’t that defeat the purpose? 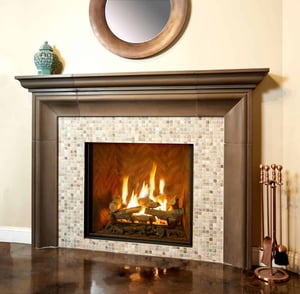 Not so. With Ortal’s double glass heat barrier, you get the best of both worlds. The glass stays cool to the touch, while the heat from the flames is circulated back into the room, giving off enough heat to warm a large room at a nice comfortable pace/rate

Why does it all matter? It matters because you can place an Ortal fireplace anywhere: in bedrooms; in highly trafficked areas; in the middle of a room; in a bathroom; in a room where small children play. It matters because you get more warmth throughout the frigid Massachusetts winter, without the safety and environmental concerns that go with older, dirtier, and less efficient models.

At the end of the day, Ortal’s direct vent gas fireplaces are greener, safer, and more versatile than the alternatives. Next time you install a new fireplace in your Massachusetts home or business, make the smart choice. Choose Ortal.